Description: The REACH compliant Graficast series is a soft cadmium-free cast PVC film, provided with a pressure-sensitive permanent acrylic adhesive.  This adhesive is protected by a high-quality silicone paper.

Application: The Graficast series was developed for long term outdoor applications (7 to 10 years) under the most extreme conditions.  As the film is extremely soft and flexible, it can be used over corrugations or rivets with ease.  Graficast films are therefore suitable for sign making on cars, boats, trucks and aeroplanes, but also for stripings in the auto-motive industry. 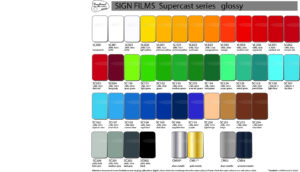